I was extremely lucky to be taught by John Minton, one of the kindest and most generous people I have ever met. I will be writing a later blogpost about John Minton but wanted to advertise an exhibition currently on until 27th January at One New Street Gallery in Herne Bay.

The gallery is run by Terry Sole and Helen Wilde and is open Friday and Saturday from 10am till 5pm. It is easy to find as it is just off the High Street by Casa Mia Restaurant. For more information call 07516756592.

'It’s a must for illustrators as Minton taught and his short life was filled with commercial commissions. The show itself is a non selling one but the Catalogue, postcards and some prints are for sale. Martin Salisbury's splendid book 'The Snail that climbed the Eiffel Tower and other works by John Minton, published by Mainstone Press is now out and worth having.'

This is a great opportunity to see some of John Minton's work; his rich flowing lines, both lyrical and romantic, he was a huge influence on a generation of artists and a sad loss to those who loved him and his work.

Posted by Delia Scales at 18:14 No comments:

In my 85th year I often come across random sketches I made while working in Surrey Docks in the 1950's.The sketch below is one I made of a Russian sailor from the ship U.S.S.R. Baltika in 1958. 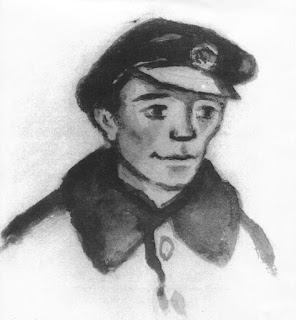 Of the many large passenger / cargo ships that traded in Surrey Docks this vessel in particular stood out. Apart from general cargo, she transported groups of Soviet Diplomats and other officials. From prow to stern she was painted a gleaming white which emphasized her great height equalling that of the Cunard liner which moored on the opposite quay.

I was quite surprised to see women on deck doing most of the manual work, something which would not happen on other global shipping lines. Sometimes friction would occur between the ship's officers and the dockers loading cargo. As was usually the case the dockers used their big hooks to make handling heavy bags easier. The officers objected most strongly to this practise, as quite rightly, they could see the hooks would make holes in the bags. The dockers tended to ignore these remonstrations or wait until the officers left and then carry on as before.

On the quay a small group of Russian officials waited to board ship. They did not look too happy at the prospect of returning to their home ports. With most ships, dockers and crew members usually exchanged a few friendly words and in the ships from Rotterdam it was the custom to buy Dutch and German beer from the crew but no similar contacts could be made with the Russians for this was 1958 and the cold war was at it's height.

When the Baltika sailed out of the dock, she left in grand style playing loud, martial music with all her lights blazing brightly. Everyone stopped to watch for she was an unforgettable sight.
Posted by Delia Scales at 20:10 No comments: