Terry Scales has a formidable exhibiting history, showing his first work at the age of 16 alongside David Bomberg in the first Victoria Embankment Show of 1949. Since then he has exhibited continuously with The Royal Academy, London Group, Arts Council of Great Britain and the Arts Council of Scotland, appearing in various shows with Austin Desmond Fine Art, Belgrave and Michael Parkin Galleries, Thompson's and Cadogan Contemporary. A retrospective at the Financial Times followed in 1996 and a 'Riverscape Show' at the Age Exchange, Blackheath for the Millennium Celebrations in 2000. A major retrospective 'Homage to the Working Thames' was held at The Guildhall in 2003, the works from which exhibition can be seen here. Terry continues to exhibit and a list of both forthcoming and recently held exhibitions can be found here.

Amongst those who have commissioned paintings are The National Maritime Museum, Tate & Lyle, Scruttons PLC, The Civil Service, Axe Valley Heritage Trust and many private collectors in the U.K and abroad.

Paintings are currently held in the collections of The Landmark Trust, The London Boroughs of Southwark and Lambeth, The South London Gallery and Guildhall Art Gallery. 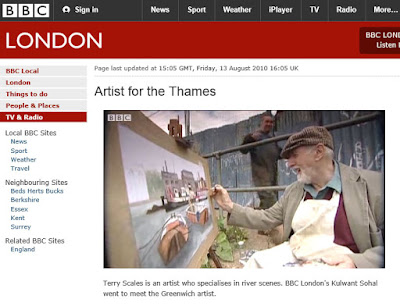